But what if I fail?

Or worse, what if I fall. I was trying to organize a trip to a roller rink recently, and the common response I got from a lot of friends was "I don't know how. What if I fall?" And this is maybe a legitimate concern. We are getting older after all and a little less coordinated. But have you seen Kristen Bell and Dax Shepard dance around a roller rink in their insta stories looking like they are 10-years old and having the time of their lives (if you haven't you need to check it out)? What if instead of falling we're missing out on this, and so many other chances to try something new that could be amazing. That could just be the thing that sets our souls on fire. Maybe it's not roller skating for most of us, but you get the idea. 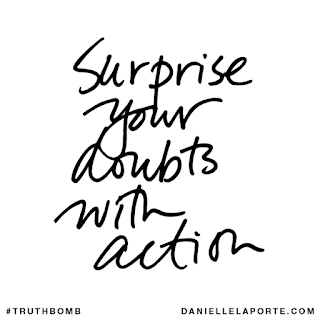 I've had a lot of doubts lately. An intense, almost debilitating amount in the area of the one thing in my life that feels like part of my DNA, that I feel compelled to do, writing. For better or for worse. So I play really small because of the fear of failure. The bully voice in my head (that sometimes wears the face of this girl in University who, with lip constantly curled up in a snarl, would almost "tsk" away any desire or passion you had that was outside of the norm) pops up on the daily, and more often than not at 3A.M., to remind me that this is a waste of my time and energy (I should be going on dates and getting paid for sh!$). That my writing probably will never go anywhere. That I'm an impostor in this, as well as every other area of my life.
Whenever I get really deep into this highly ineffective mode of thinking, I'm reminded of a boyfriend I had a few years back. He, like me, had gone to business school but leaned towards more creative pursuits. He had a pretty awesome concept for a graphic novel series and was putting every last effort into making this a reality. He had a business plan before he had the product and had absolutely no major doubts that he shared with me. He didn't have the time for it, he was all hustle and positivity. His encouragement and full confidence in me pursuing my side-hustle as a writer is something that I miss to this day. When I would introduce myself at parties and say where I worked for my day job, he would say "but she's also a writer." I would correct him and say that "I like to write," but he would cut me off and insist that I call myself a writer. I put the time in, I had the goal and I needed to keep pushing forward. Time spent on doubt could be spent writing a pitch, researching, creating an elevator speech for the book, etc.


I still think I derailed for years on this side project because we broke up. I remember after we had ended things being in an Indigo store and going to look up a book. When I went to the computer terminal, his graphic novel book was right there on the front screen indicating that someone had just searched it out for themselves. It was out in the world and people were looking for it in the store. A few minutes later I bumped into him and his new girlfriend in a different part of the store. Turns out it was part of his grass-roots marketing strategy to leave the book on the front screen of all the computers in the store. He literally had no shame and a relentless belief in his project. He didn't care if people thought he was trying too hard or if they didn't like him or what he was doing. He believed in himself and what he was doing and he let everything else fade to black. Haters have no power if you don't give it to them (including the hater in your head). 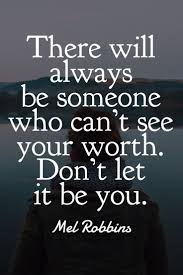 Here's a question on failure though. Say my writing is just for me and those in my circle. Say the reach isn't far and I make no money on it. Can we really call that a failure? I'm writing and enjoying it. Life is about doing what lights us up. About sharing things that we feel compelled to share. In that sense I'm "self-actualized" and we're moving up on Maslow's hierarchy of needs, no?
But in reality I probably do need to stop playing it soooo small. Where I apologize for my inadequacies and use language that talks about how this is "just a side hustle" as opposed to something I really care about. People that make it happen in their area of choice (not all, but certainly those that do share this characteristic) put it all in, no apologies. Here are the biggest fears that I'm struggling with right now:


Recognize any of these in relation to your own pursuits? I'll bet money on the fact that these  are pretty common. But the fear of not living up to our potential should trump all of the others ones. In my 3A.M. doubt panic sessions a common phrase comes up: Just do it anyway. Just do it anyway. Feel the fear and do it anyway. Embrace the uncertainty and do it anyway. Who cares if someone likes it. If it helps one person that is something more than sitting on your couch and watching Netflix. If it doesn’t go somewhere, you can say you tried and move on to the next thing that makes you feel alive and purposeful.


Not everyone needs to understand or like what you do. Successful people hustle and don’t stop when it takes forever or when they get a bad review. One of my favourite writers and instagram personalities and the author of Careeergasm got a bad review on her new book and she shared it on her blog stating:

Make it even though some people aren't going to like it.

Make it even though your feelings will be hurt when that happens. That's okay. You're human.

You are going to care what people think. Let's not deny that. But you can care about what people think, and make your thing anyway.
I need to take my own advice right now and go and do my favourite thing (said with all the sarcasm in the world) ...edit.
What areas of your life are you "playing it small" in? What would you do if you knew you couldn't fail? 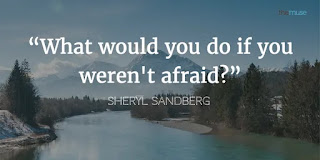 Carrie Oreskovich
For anyone that knows me, my times overseas were some of the best I've had. Before I moved to Japan years ago for a sabbatical, I used to have a dream (or daydream...I"m not quite sure which) of me walking along a grey and rainy street in Tokyo, with a red umbrella. That image became a reality (red umbrella and all) twice while in Japan, in moments where I felt happy, complete, and like i was in exactly the right place at the right time. So the red umbrella represents the realization of a dream and the wisdom of trusting your instincts and doing what feels right. Here's a little more about the journey to reach my dreams and to live the life that I have imagined...